Why I (increasingly) use the pronouns ‘they/them/their’ 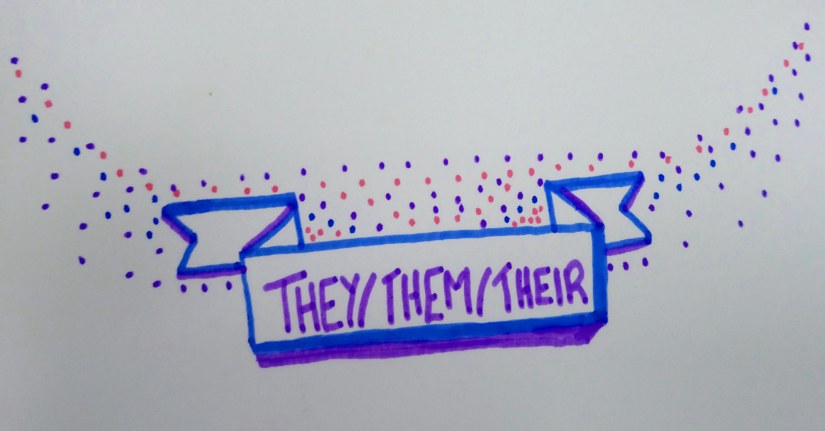 When I first transitioned, I used (no, insisted on using!) male pronouns. In my early transition, my main priority was to be read as male. I have because increasingly aware that this is a narrow way to understand my gender. I am transmasculine, but I am so much more than male.

I have recently begun to use the singular they as my pronoun. Here are some reasons why.

1. The system is broken.

The gender binary is a human, broken system. Any system that reinforces two, strictly divided ways of being is dangerous, oppressive and damaging. By using male pronouns, I was buying into a broken system. Now, I refuse to narrow myself in order to appease a constructed hierarchy.

Language is one of the ways in which we express truth. When there is no language for our truth, we need to recreate or reclaim words. I am reclaiming the neutral they, which has fallen out of common usage. If you say that it is too difficult to use this word, read this sentence:

“I wonder if they know that they have forgotten their umbrella.”

We use the singular they all the time, without being asked. Let’s start to use it when asked too.

3. I am transmasculine, not merely male.

I am transmasculine. I have transitioned from female towards male. I do not, for a moment, regret my transition. Hormones have greatly improved my mental and physical health. Chest surgery has removed flesh that caused me pain and dysphoria. Being seen as male unlocked the chains that held me down when I could not express my maleness.

But I’m more than male. I am not going back towards female. Rather, I explore the largely uncharted territory of gender nonconformity. Where boys can wear nail varnish and girls can pee standing up. The bottom line is this, all people should be able to express themselves in all of the ways that they choose. And some of the ways I choose are feminine. And that’s OK!

It is important that what I say about myself is true. When I say that I am ‘he’, that is not 100% true. Some trans people are ‘he’ or are ‘she’, that is their truth. I’m masculine/queer/nonconforming/. I’m more than male or female. I need to hold the truth of that ‘more’ with visible integrity.

As well as the personal important of integrity, it is also crucial that my visibility helps others. Gender queer and gender neutral people are not visible or respected, even within parts of the lgbt community. By using neutral pronouns, I will persistently raise the identities of those of us who don’t conform to the norm. We are here. We are real. See us.

God is mysterious, God is multiple Persons in one Person, God is all genders and none. When asked to define themself, God simply says ‘I am’. When we decided that God was ‘he’ and that humans were divided between ‘he’ and ‘she’, we marginalised God’s mysterious image amongst us.

‘This is Alex. Alex is a pastor, activist and educator. They work with the trans community. Their wife and dog are awesome. You should meet them!’